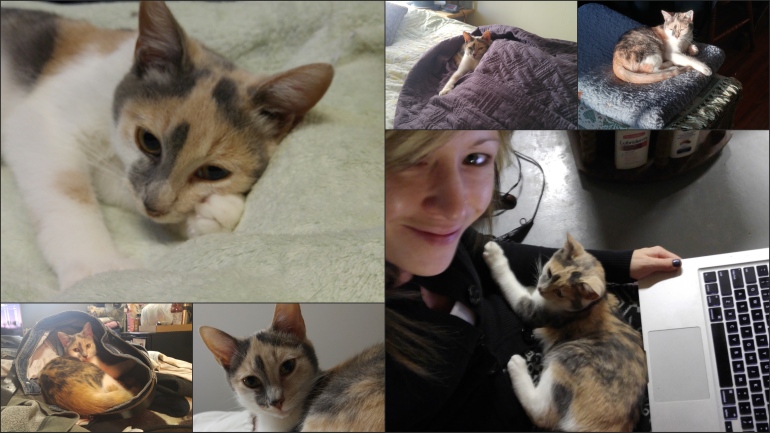 She came to us on a cold fall Sunday.  We found each other in a way.

My love and I were about to venture out to run some errands, grab some groceries, and visit some people but we had to check our oil in our van.  An oil leak that I was not financially able to repair at the time kept me checking the oil often.  I went back into the house to get something I had forgotten, when I came out the front door and slammed it shut I could hear meowing.  I think…?

I get back to the van and I asked my love “do you hear meowing?”.

I can’t remember wether he said he did or he didn’t because I had already started to look for the source.  Having a house full of cats already I originally thought perhaps someone got out and needed back in.  I followed the sound and kept calling “kitty kitty” fully expecting to find one of ours out there.  Then I saw her.  A tiny calico kitten sitting in between the deck and the pool, wet from the rain, meowing her little face off.  It was not one of ours.  “Crap” I thought.  I do not need a cat right now.

She looked so happy to see people I couldn’t just leave her out in the rain with nothing.  I ran into the house and mixed her up some kitty crunches and cream in a bowl and warmed it up a smidge in the microwave.  I brought it out to her and she was scared so I had to leave it under the deck for her.  As we walked away I could see her lapping up the cream from the bowl.

As we got into the van to leave I felt so bad for this little kitty.  It’s cold and it’s only going to get colder.  It’s raining and miserable out.  I assumed she was a little girl and immediately worried about her being out in the bush alone [there is a large wooded area behind my moms house].  In hindsight I should have grabbed her right then and there and brought her inside but I did not.  I thought it would be some huge deal if I brought yet another cat into the house (my sister re-homed cats and kittens for years and she has a few “leftovers” that she keeps around).

I did not see her when we got home only a few hours later and I worried she was already gone and I was too late.  I could not sleep that night.  I could hear the wind and the rain pelting at my window and my heart ached not knowing where that little kitty could be.

By the next morning I woke to a knock on my bedroom door.  I opened it and there was my sister holding the little kitten.  “Oh little baby!” I exclaimed out of excitement to see her.  She was so tiny and so afraid yet so happy.  She purred and purred.  We fed her, pet her, talked to her, I gave her a soft blankie to lay on.  I knew I wanted her but I tried to bury it.

The original plan was for my other sister to adopt this kitty because she thought she wanted another cat and she has a soft spot for Calicos.  She was supposed to come pick up the cat that week.  I secretly dreaded the day.  Then a week came and went, a month, and upon getting up to 3 months I decided I had to keep her.  I had become too attached and did not want to let her go.  As luck would have it my other sister decided she did not want another cat, I suppose her lack of coming to retrieve said cat was evidence of that all along.

So I got to keep her.  She went a while with no name because I did not want to name her assuming my other sister would do that.  The day we brought her in the house my sister [who caught her for me] suggested the names “Pearl” or “Marble”.  I liked both of these names and in the end took “Marble” because it seemed to suit her.  The name “Marble” was inspired by none other then Jenna Marbles.

She is now happy, healthy, and almost a year old.  She has given me a few scares, I spent more then one morning sitting in the vets office because she had this issue or that issue.  For a while there I was really worried about her but ever since she has gotten fixed she has been great.  She has previously had a few dizzy spells and my [new] vet told me that if she has ONE more to call them immediately because it could mean she is having seizures.  That really scares me but she hasn’t had one in months that I am aware of and since moving in particular she even seems happier.

She is such a little ham.  She cracks me up everyday.  She loves real tuna and sleeping under blankets.  She is still very tiny but she packs a lot of ‘tude in that tiny package.  I am so happy that I found her and that I kept her.  On days when I am literally alone she keeps me company.  She is the best nap partner.  When we first moved and I had a few days of “depression naps” she slept beside me every single time.

She is our baby and I look forward to many years with her.

My name is Carla and I Dream in Vintage.

I enjoy thrift stores, tea, sometimes coffee, walks on sunny days, that old time rock & roll, and cats.  I love my record player and could not live without music.  I love to type (strange but true) and I enjoy blogging but admittedly don't blog as often as I would like to because I tend to over think EVERYTHING and, well, we all know how over thinking usually turns out.

I started this blog as both a creative outlet and a therapeutic practice for myself.  I wanted a place I could talk about OOTD's, Eyebrow Problems (lols) and Tattoos as well as a place that I could openly journal my battle with PTSD.  I would like to advocate for mental health and self love.  Two very important and often very underrated elements required to be happy (I think).

I feel as though I am on a journey to my best self and I want to document the ride.  Bumps and all.  So let's brace ourselves and try to enjoy the scenery.

Inspired by the Music and my love of anything Vintage.